August 09, 2011
On our last full day in Tahoe we went on a hike.  Again we loaded up into the bus and this time were brought to Emerald Bay.  We loaded up on water and were given a choice to hike a mile down to the bay or two miles to a lake and waterfall.  The two mile hike was to be the more difficult hike.  Can you guess which I chose?

Ry and I followed our guide who happened to be from Michigan!  His sister had attended Ryan's college!  He led us through the mountain side over the rough trail.  It was a gorgeous hike!  In some places the forest was dense so we were saved from the unforgiving sun!  Much of the trail had been carved out so the hike was actually not too difficult! 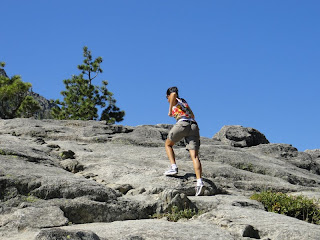 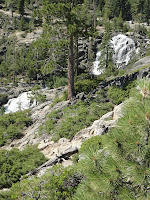 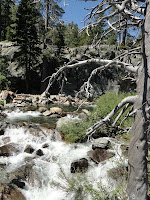 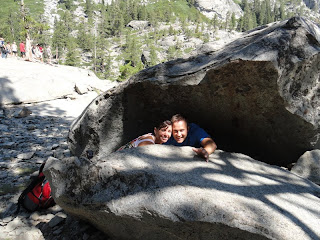 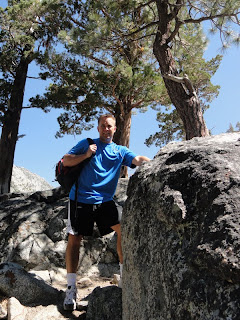 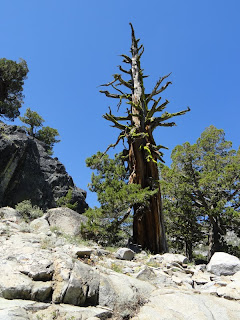 What made the hike even more fun was the other people on the hike with us.  There were 3 brothers in particular who were on the hike.  I thoroughly enjoyed their banter and cheap shots at each other.  They even started playing a game while hiking where you have to name bands or singers in alphabetical order.  I'm not too good at that game.

We reached Eagle Lake in the middle of the mountains and I waded in.  The water was crystal clear and so cold.  My toes and legs were numb within seconds!  I couldn't resist wading in as far as I could though.  I wish I had worn my suit so I could have jumped right in for a swim.  The water was so refreshing after I had feeling back! 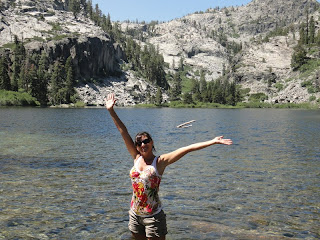 After hanging out at the lake and taking a ton of pictures of the waterfall and scenery, we headed back to the bus.  Ry and I made it back in time to hike down to the bay so we headed down!

We really did speed walk down to the bay.  The path was wide enough for vehicles and all downhill so we were propelled at a fast pace!  It's too bad Ry didn't tape me walking because I know I looked ridiculous holding my fingertips to the sky because of all of the blood and heat making me swell! 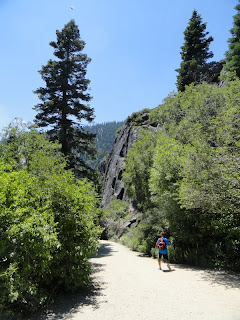 At the bottom of the cliff we saw the Viking House.  Vikingsholm is a 38 room mansion that lies on the shore of Emerald Bay at Lake Tahoe in the El Dorado county of California. It's a place that is listed in the National register of Historic places and is located on the western shore of Lake Tahoe.  Inside the building you will see many great examples of Scandinavian pieces of work, from antiques to reproductions. On the second floor of the mansion you will find reproduced pieces of art from the 18th and 19th which kind of give it a medieval feel to the building. 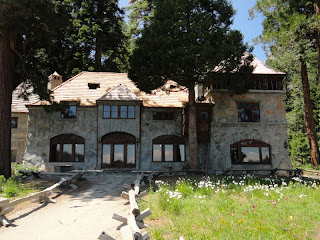 Vikingsholm looks out over Emerald Bay.  There is a small beach in front of the mansion where people gather and swim.  Boats anchor in the bay and a ferry frequents the area around the island in the bay.  It was a beautiful day so I had to of course touch the water, but that was all we had time to do.  We had to head back up the cliff back to the bus.

After hiking 5 miles it was now just after noon and hot!!!  We went back up the trail and I thought I was going to die!!!  The way back felt like we were going straight up the cliff!  I was walking like I was on downhill skis - you know leaning right into the side of the cliff as I was trying to walk up it!  The sweat was dripping off of my forehead!  When we reached the top, people took one look at the two of us and asked if it was really worth it!  We must have looked as though we had been through the ringer!  To be fair we were really taking that last vertical mile fast in the hot sun!!

This was the very first business trip that I came home sore!  It was very worth it though!! 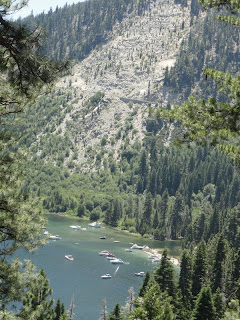