When Ry and I were first married and without children we spent every weekend at his sister's house.  We had a lot of nights where we nearly peed our pants from laughing so hard from one crazy thing or another!  We made up our own games and entertainment.  But some nights we enjoyed the entertainment of the the Great Daryl Nathan. 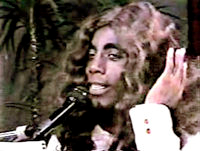 The Great Daryl Nathan appeared on public access cable in Grand Rapids, MI in the early to mid nineties. With his puffy long wig and sauve white tuxedo, he would soulfully sing over keyboard presets, reading the lyrics from an old notebook while occasionally hitting a drum fill and flinging up some jazz hands. In "Spinning Wheel", Daryl treats us to a few twirling dance moves.


The Great Daryl Nathan was teased for his dedication and seriousness about his music which I hear he did not appreciate, but it certainly made him more popular!  I can't find what he is doing today, but he has some facebook pages that you can check out and if you know anything about him post and tell us!!  In the meantime I'm sure you will enjoy his music much the same way we did!
(I have video of us enjoying the Great Daryl Nathan.  My nephew is dancing around, my father in law is singing along, and my sister in law is right in sync with Daryl Nathan's prose!  I was hoping to post it on here, but we can't figure out how to do it!! :(  So bummed because it is such an awesome video!!)