August 04, 2011
The first official day of our business trip we were taken on a bus over to beautiful Lake Tahoe near Tahoe City on the north side of the lake in California.  I have been to Lake Tahoe before, but I looked like this then:
The lake looked the same.  Crystal clear cool waters were surrounded by a crisp blue sky, snow capped mountains, and sweet smelling pine trees.  I was surprised that the air smelled like the pine trees.  It was sweet and fresh.  You couldn't help but take deep breaths and gulp in the air.  It could be that it felt so clean or that we were at a higher altitude so we needed it because we are out of shape, but whatever the case, it felt good! 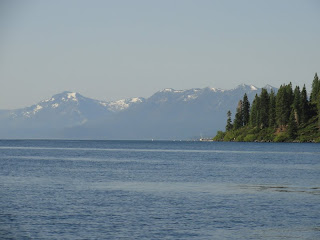 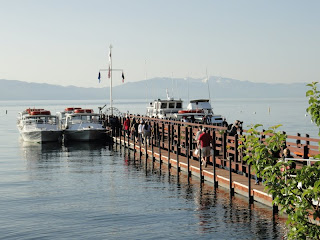 We split off into groups and loaded up on boats that were waiting at a dock for all of us.  It was time to go fishing!

We were fishing Mackinaw Lake Trout that were actually transplanted from our home state!  They are on the bottom of the lake and even though you can see about 50 feet down, we were fishing about 150 feet down so we couldn't see them until we snagged one and reeled it up to the surface. 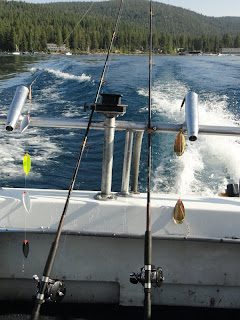 This was not the type of fishing I'm used to on the inland lakes of Michigan.  You don't cast and reel or set the hook.  You drop your line until you feel the weight hit the bottom of the lake, which can take a really long time!  Then you pick your pole up smoothly and make the weight bounce off of the bottom a couple of feet.  That is all you do to catch these guys!  Bounce, bounce, pause, bounce, bounce, pause.  I will admit that your arms do get tired after awhile.  The poles are pretty heavy duty!

The first trout caught was a nice size!  As you can imagine it took awhile to get it to the surface and into the boat!  When you are fishing at 150 feet it takes awhile to get that line in - fish or no fish!

When it was my turn to try to bring in the big one I was told by Captain Bobby that I had to reel it in nice and smooth and jam the rod into my gut.  That fish was heavy!  I jammed that rod into my gut, rested the pole on the railing, took a squat like stance (that wasn't too lady-like) and went to work!  It took forever!  I was sweating and my arms felt like they were going to fall off as I brought him to the surface!  He was huge.  I am not telling a fish story here either!  As he came to the surface he got off the line!  He was too far from the boat to net him. The first mate, Nate, ran to the side and actually stood up on the railing.  He was going to jump in after the fish!  He hesitated a second too long and the huge trout flapped his tail on the surface and skirted toward the deps!  I told Nate I would have given him a $100 tip if he had actually dove in after the fish!  He didn't even have to actually catch him!  The fact that he would have tried it would have been enough!  After I heard about what happened the last time he jumped in after a fish I can understand why he hesitated!  He got caught by the hooks in his back.  His captain pulled him back in, took the hooks out and threw him back in the lake to get the fish.  This was definitely not his first rodeo!  He had a lot of stories to tell about being out to sea for three months at a time fishing in Alaska and snow boarding down mountains only to end up having to have reconstructive surgery on his face!  I was amazed by his experiences already in life and he was younger then me!

So, no, I didn't bring the big one in, but everyone saw him and agreed he was a monster!

My favorite catch of the day was made by one of our boat mates!  She had one on and took the time to reel him in nice and smooth.  We had lost a lot of fish at the last moments so we all waited with baited breath as she reeled her prize toward the surface.  She made it look super easy!  Why was I the only one that had to use my entire body to get the fish to the surface!

As she got him to the surface we all looked over the side and discovered a true fighter on the end of her line!  He gave her quite a fight on his journey to the surface and even after he got into the boat, but he was so worth the effort!
When our time was up - three hours of fishing - we headed back to shore.  Nate skillfully filleted the trout for us.  Which we later had as an appetizer at the Resort.  They were delicious - fresh and not fishy tasting at all!

I have decided that I really like fishing. -especially on charter boats.  I can sit back in the sun and take in the views while others find the fish, bait my hook, and take off my catches!  What other sport allows you to pop open a beer at 8 in the morning while actually doing the sport?  Plus you enter contests and win lots of money for catching a big fish!  I think I will have Ry take me on more fishing adventures!  Do you think he would cater to me like the Captain and First Mate did from Tahoe Sport Fishing Co.?