August 05, 2011
After a night of watching Black Jack, eating dinner on the lake, and watching the magician Mike Sears perform amazing mind reading feats, Ryan got up bright and early for his meetings while I relaxed in the room.

Around noon we all boarded the bus and headed to King's Beach.  It was another gorgeous, warm, sunny day in Lake Tahoe!  Me being the planner I am, bee-lined to sign up for the parasail.  Ry wasn't too enthused about it, but had never done it before.  The last time I did it was probably about 20 years ago on Lake Michigan.  I landed in the water and had to unhook myself so the chute didn't pull me under.  It was great fun though and I thought going off of a boat and landing back on the boat would be way easier-  not to mention the beautiful scenery we would experience!

While we waited for our turn to parasail we went for a ride on a jet ski.  Ryan and I have been riding and driving jet skis for probably over 20 years now.  We used to ride those things when the lake was almost frozen over and it was sleeting on us!  The only skin you would see would be on our faces!  I would drive and Ryan would jump off of the back doing flips while I gunned it!  I remember a time my littlest sister was driving and sent my middle sister flying off the back.  The engine sucked up her hair and cut it!  There were new rules for the jet skis after that little incident!

Our jet ski ride on Lake Tahoe wasn't nearly as crazy as our rides had been 20 years ago, but it was still great fun!  With big boats on the lake and a lot of open water I was free to go as fast as I wanted to and hit the big waves!  We flew over those things and crashed into the next walls of icy waves!  Ry hung onto my life jacket with an iron grip and my hands lost all blood flow because of how hard I was gripping the handles so I wouldn't be thrown backwards!  We were soaked!

Afterwards, I think people were a little surprised that I didn't have Ryan drive.  That option wasn't even a thought in my head!  There is no way I would sit on the back of one of those things unless I was comfortable with jumping in every 5 minutes!  Of course Ryan drives a lot differently then I do so I probably wouldn't have to be as scared of being on the back with him in control as I would if he drove like me!

We grabbed a bite to eat and then it was time to go parasailing.  A group of us piled into a dingy and headed out to the parasail boat.  I think the trickiest part of the entire adventure was navigating ourselves out of the dingy onto the boat and back into the dingy again when we were finished.  When our Captain of the dingy appeared to be 13 years old I felt a little on edge that the others on the boat may be in diapers and we were putting our lives in their hands!  (I was relieved to see that they were older then our dingy driver!)

When it was our turn, we were strapped into a harness over our life jackets and hooked up to the chute.  Away we went!

The view was incredible and our ride was so smooth!  It was amazing!  I of course had to stretch the limits and started to swing back and forth.  I leaned back as far as I could and hung upside down in the harness.  I even tried to sway it back and forth!  Ry told me to quit it because I was going to get in trouble and get yelled at!  He was only half joking!  They dipped us down to the water and we both tried to get our legs in front of the other person to get each other wet!  We had a great time! 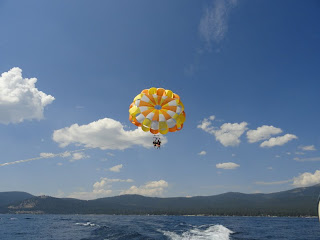 Our day wasn't done yet!  We went over to the sandy beach and had a tutorial on how to ride a long board.  We first had our own boards and then Ry came on mine with me. He managed to lay on the board and I paddled him around for awhile. (something doesn't sound quite right about that sentence..)  It was our time to relax!  We swam in the lake which was a bit chilly, but felt refreshing!  What a super fun day and it wasn't over yet!! 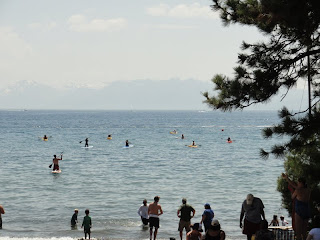 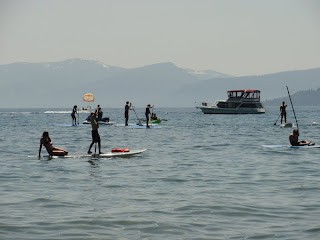 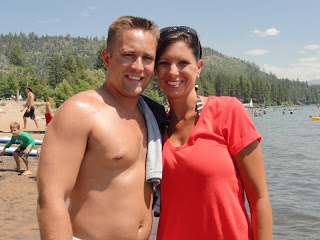