August 10, 2011
I couldn't resist telling you about our last night at Lake Tahoe and the infamous "Awkward Turtle"! 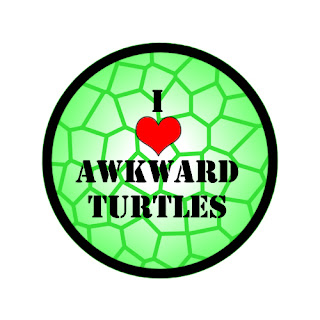 After our hike we beelined it to our room where Ryan immediately collapsed on the bed.  I however got my suit on and talked him into going to the pool with me!  It's not that I wasn't tired, I just knew if I layed down and took a nap I would never get my momentum back!
There is something so odd about having the sun beating down on you while you swim and look up to see snow on mountains around you!  I love it!  We hung around at the pool for awhile and were entertained by people who had a little too much sun and drinks.  Sometimes it's fun to watch people who are intoxicated and sometimes it is a little painful!  It is almost like an accident.  You want to know what is going on, but you feel like you should look away!  (a good time to pull out the awkward turtle!)
There were a group of people in the pool playing the band/singer game we played on the hike.  This time they picked a letter and each person took a turn naming bands or singers beginning with that letter.  If someone could not think of one or repeated one they had to drink.  There was a lot of laughter and fun.  Ry and I did our part by feeding groups  and singers to players when we could!

It wasn't long before security came and told the group to settle down.  I have to say I was a bit shocked.  There was no swearing or obscene things going on.  It was the middle of the afternoon!  They were just laughing loudly!  Some people just can't stand seeing others have fun!  If you wanted peace and quiet you should go hike to Eagle Lake or stay in your room.  Hotels are filled with people who make noise!!!

Our last dinner there had an Oriental theme.  They had red lanterns and Asian cuisine.  I was extremely happy to see sushi.  I can't figure out if it is the actual sushi I love or the ginger and wasabi!  I just can't get enough of it!!  (my mouth is watering just thinking about it!) During dinner they had music and a show.  People in dragon costumes came out and performed.  It was a great show!

We were to get up at 3 the next morning to go get our flight home so I know Ryan wanted to get to bed at a decent time.  (he told me repeatedly that that was the plan) Maybe he forgot he was traveling with me!  After dinner we went inside with a group of people and hung out for quite a time!  I laughed so hard I almost peed my pants!  It is then that I learned of the "Awkward Turtle".  I plan to introduce everyone I know to the "Awkward Turtle" and get it started in Michigan as I hear it is already on the streets of Miami!

First, I had no idea until just this moment, when I googled it, that an "Awkward Turtle" really is an actual thing!  From the Urban Dictionary:  During an awkward moment, this hand gesture is used to mark the situation as awkward, and, depending on the situation, makes it more awkward or clears the air. The awkward turtle is made by putting one hand on top of the other with the thumbs sticking outward and rotating forward. The speed of the rotating thumbs depends on the degree of awkwardness. 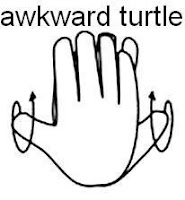 Now what you need to do is to put your hands on top of one another -both palms down.  Put one thumb in and have him swim off to one side and down or you can just spin those thumbs- now you have your "Awkward Turtle".  What is the purpose of this?  Let me set up a situation.  You are hanging out with a bunch of friends.  You are chatting and having a good time.  Suddenly someone says something that is neither appropriate nor humorous.  Everyone is feeling a little awkward.  That is until you pull out the "Awkward Turtle"!  Just do the hand motion and the ice will be broken!  Maybe a nervous laugh from a few people but then you can move on!
During our last night in Tahoe a lot of "Awkward Turtles" came out to play.  Many of them actually crashed and burned on the table because things were so awkward and it is just fun to do and a few forgot they were awkward and acted a bit frisky instead! (somehow one turtle turned into two and.. -well if you want to know that motion you'll have to ask!)  Such a super fun night and I even learned something new!  Needless to say, we did not get in bed at a decent time, but we were able to sleep on the plane so no worries!