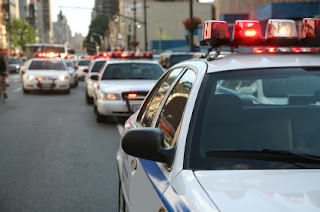 I like to think I am a pretty good driver.  I do well driving in snow, rain, and in the dark.  I can even hold it together when the kids are screaming behind me!  I try to obey all of the traffic rules, but sometimes I do have a little bit of a lead foot much like my father.

I managed to go almost 20 years without getting pulled over and I was very proud of that fact!  Last year however, I received my first ticket ever!

It was Labor Day weekend and I was supposed to go golfing with my mom and sisters.  I am not a golfer and it really wasn't my idea of a super fun morning.  (although it did turn out to be fun) I had just started back to work and although I loved my co-workers, students, and job, I wasn't ready to leave my babies!  Already I had one thing after another go wrong and I was stressed beyond belief!

I was on a busy expressway just going with traffic.  I was actually driving Ryan's car so that is one of my excuses as to why they stopped me!  They wouldn't have stopped me in a mini-van and I wouldn't have been going as fast as I was!  I noticed on the overpass someone holding something out.  It should have dawned on me that it was a police officer clocking traffic, but the first thing that went through my mind was that someone was going to throw something on my car as I went under!  (like in that movie - I think it was The Good Son or something like that) That thought didn't last long because I saw the police car as soon as I went under the overpass!

I seriously shook as I pulled over off of the expressway.  I was soo nervous!  I had never in my life been even stopped before!  He took his sweet time getting to my car and processing the paperwork.  I think I sat there for 20 minutes feeding baby Tyce food in the backseat to keep him from screaming! 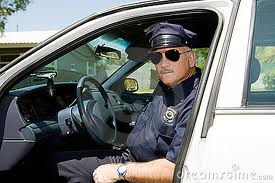 I held it together until I called Ryan to tell him what happened.  Then I just bawled!!  He actually laughed which didn't make it any better!  My first ticket in my life!

Fast forward a year and a half later and I was driving the mini-van with the kids in a small town.  I was going with traffic and only 5 miles per hour over the speed limit.  I was the last one in line so I didn't stand a chance.  I was pulled over.

The kids were amazingly quiet and the police officer didn't even look at me as he asked for the proper paperwork.  He almost ran to his vehicle and was back in about 5 minutes with my ticket!  Seriously!  I was only going 5 over!!  He must have had a quota to keep that day or something with how fast he was moving!

This time when I called and told Ryan about the ticket he said I needed to start wearing lower cut shirts and trying to sweet talk my way out of the ticket!  Being that the man didn't even look at me it wouldn't have mattered anyways!

My favorite pulling over story was told to me by a friend.  She has to be on the road a lot for her job and often gets stopped.  One particular time she was stopped by a female officer.  As the officer was explaining what to do with the ticket my friend interrupted her and said, "This ain't my first rodeo sister."  Only she could pull that off!!  I laugh each time I think about it! (maybe you have to hear her tell it..)

Anyone out there have some good stories about being pulled over to share??  Or suggestions on how I can get out of getting tickets???
police speeding tickets tickets