Our Day in Court 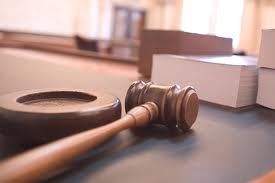 On Tuesday we journeyed to court with A.  This was the first of many court appointments he will have in order to reside here in the United States.  Our next court appointment in our city will be in January and he will have additional ones that take place in Detroit as well.  (I am hoping that these kind of court appearances will the the only kind we will ever have to make with the kids!)

We arrived early and we sat and watched the names scroll by for all of the court cases scheduled.  Wow there were a lot of divorce cases on the docket!  We are assuming that they were divorce cases because of the court we were in and two people's names were listed -one male and one female with the same last name for the same court room.  I found myself trying to guess what the people were actually going into court for and which ones were the lawyers.  It was actually very interesting - it amused me anyways!

Back to our time in court...  Of course we had prep A for the event.  This was a big deal.  The judge could decide that he could be sent back to Guatemala or could make it difficult for him to stay here.  Try explaining to a 16 year old about court and legal issues when he has never heard of such things in his own language!  Try explaining that he has to present himself in such a manner that a grown-up will like him.  He is first and foremost a teenager and what teenager is ready and willing to conform for adults they don't know!  This means dress pants and shirt, nice shoes, no gum, sitting up straight, no mumbling, and eye contact!  We explained this to him in English and in Spanish more times then I would like to admit!

I think he understood the gravity of it all though because I was never more proud of him then when the judge spoke directly to him and A looked him in the eye as he sat up straight and tall!  (he also spit his gum out before he stepped foot into the building!)  He was very attentive during the entire proceeding and did a fantastic job!  I think Ryan knew I was silently praying he would do well because he grabbed my hand while the judge spoke directly to A.

I was impressed by this judge and I hope that A listened attentively to him and takes his words with him.  I wish I could have his speech written down word for word.  He first welcomed him to the United States and explained that we were a country of great opportunity.  He said that A needed to take advantage of these opportunities because then he would be able to do almost anything he wanted to in life.  He asked that A abide by the rules of this country and work hard to be the best that he could be in his life in order to be a productive member of society.  He said much more and better then I am saying it here, but I was happy that A was hearing it from someone in such authority.  Hello!  I have said the exact same thing, but I am just the Mom!  So now at least I can whip out the "Do you remember what the judge said?" (I think some of it did sink in right now anyways because when we arrived home A changed and go right on the computer to work on his Rosetta Stone to learn English!)

The proceedings determined whether A would become a temporary ward of the court.  The judge granted this after hearing about A's care now and where he came from.  I know A's history so it wasn't of any surprise to me, but I wondered how he felt hearing it so bluntly spoken in such strong words that we had never used to describe his situation in Guatemala.  We wanted the judge to make him a temporary ward of the court so we are now one small step closer!

I was a bit surprised by the formality of everything and all of the legalese that had to be announced in court so that it could be documented.  It's fortunate it was such a cut and dry case because it took only 30 minutes!  I told A that the only thing I was disappointed in was that when the judge asked him if he wanted to say anything he didn't tell him that I was the most most awesome foster Mom ever!  Oh well, there is always next time! ;)
refugee foster care