July 25, 2011
Three years ago Ryan and I moved into our home.  This is the third home we have lived in and by far it is the newest and nicest and most importantly it has the best neighborhood with the most spectacular neighbors ever!

Since we have moved in we have had meet and greets, random get togethers with and without kids, hang out time around firepits, parties, a progressive dinner party, a murder mystery dinner, and even a girls only wine tasting road trip!  (I'm sure I've missed a few events in there!) If we were unable to leave our home and neighborhood we would definitely have enough social interaction here!  The money we have saved on babysitters alone has been awesome!

This past weekend we had yet another spectacular neighborhood get together!  Two of our neighbors arranged to have a "Second Annual Backyard Concert".  (Thank you guys!!  It was sooo awesome!!)They provided food, drinks, and a stage with a live band!  Neighbors and friends gathered to listen to music and chat.

The band was Nervous But Excited.  They are awesome!  The way their voices mix together is amazing!  I love their songs and sound!  What makes them even greater though are their personalities!  They put up with a bunch of crazies playing on their equipment- one of which was my husband who seemed to have control of the microphone for hours and was belting out tunes!  I think I saw him briefly give the mic away a handful of times only to take it back again and again and again!  After 13 years of marriage I had no idea he wanted to be a singer on stage!  After the crowd cleared out (which I hope wasn't due to Ry's renditions or my dancing) the girls gathered around the fire with their guitar.  They took requests and played some of their own stuff.  What other group would hang out with a bunch of crazies and and not roll around on the ground with our attempts at harmonizing!  It was super fun!!

Go check out Nervous But Excited!  They have great music and are great people!  You may even want to get them to come and do your backyard concert!  I'm sure you all would like to see Ry's performances as well, but I have a feeling that was a one night only treat! 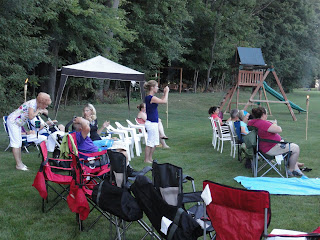 The video is an extra special treat!  We add all kinds of entertainment!  It's almost like you're in Vegas!!
Nervous But Excited