June 08, 2011
I love to sing!  I love to make up songs for the kids and belt out lyrics to songs on the radio.  I sing in the car, sometimes in the shower, and even sing while I exercise!  You would think that since I am an adult and have heard some songs over and over and over again that I would actually know the lyrics by now.  Nope!  Not true!  Sometimes not even close!

I'm sure there are quite a few songs to which I happily belt out a totally different song to!  It is funny that a few of them I didn't even know until well into my adulthood! One such song is "Islands in the Stream".  So the actual name of the song should have given me a clue that I should not have been singing "I was in the stream" for the chorus!  Guess I never took the time to know the title or maybe I thought that was the title!  Pour some Sugar on Me  has always been sung with a verse about Mt. Soggius (it is supposed to be "Come on sign me up") and my most recent made up lyrics were Galileo for "Gotta let go" in Dynamite! (This one I was even singing in a group exercise class and I'm not shy about singing!) 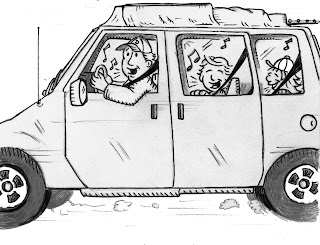 I think we should most definitely be the new Partridge Family!  I actually stopped singing to listen to our harmonious vehicle and couldn't help but laugh!!  Priceless!!!
singing in the car