June 26, 2011
The first weekend we added a fifth child I found out that I was not in fact "Super Mom".  I so wanted to be her for maybe only two minutes before I decided that it was utterly rediculous that I was doing all of the work in the house and had five able bodied children that could help out! (plus there is no real reward or recognition for that anyways!)

I set off on a mission to find the best chore system that would work for our family.  I have tried charts and stickers and things before, but I can never follow through!  I start off strong and then forget to print off a new chart or to pay the workers.

I checked out books and did some searching online.  I finally found something I thought I could do.  I found some really cute ones here and took my final idea from Confessions of a Homeschooler.  I loved that I had most of the material so I wouldn't have to go out and spend a lot of money and she provided me with everything else! 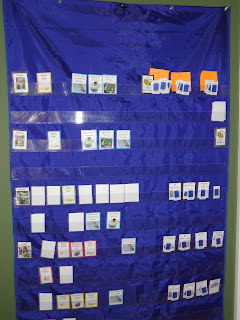 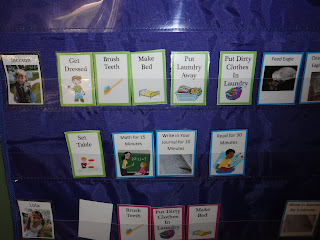 The three youngest will earn tickets for their chores and behavior to be able to redeem them every two weeks.  Jackson will get money for his tickets and the two littlest will have a prize box where they can use their tickets to “buy” something. (Like Chuck E Cheese)  The little ones are more motivated by things they can see and it is my hope that they will want to save their tickets for really cool things rather than spend them all just because they have them.

Jackson's area probably has the most involvement. He earns tickets for behavior - or loses them - and for extra chores. There are some chores he does every day that he must do just because he lives here. He has to do those chores before he can earn tickets for the extra work. Each ticket for him is worth five cents. We picked this amount so he has the potential to earn around $8.00 a month (his age) for his work. We also have given him tickets for extra helpfulness and kindness that we have noticed. After a month we will reevaluate his performance and perhaps give him a raise in pay.

The two older boys mostly have school work items on their chart right now. I don't have to really put other chores down for them. I just have to ask them to do something and they do it. Sometimes they actually ask to do things like mow the lawn! I LOVE that! They can have the yard done in 45 minutes when it took me two days because I had to continuously stop for the little children!

The chart has been really useful with the little ones.  It helps me not have to tell them over and over again to do daily things.  They have to do things like brush their teeth and make their beds, but the real chore for them is maintaining good behavior.  They start with four tickets each day.  If they choose to make a bad choice they can lose a ticket.  They are not a fan of losing tickets!  They can also gain a Best Behavior card if I catch them being super kind or helpful which is worth an extra prize or money.

When I first explained everything to the children and told them that the more kind, safe, respectful, and responsible they were, the more tickets they would get, I received this response from Lola:

She's got it figured out!!
chore chart