Today is our 13th Anniversary!
Ryan has survived 6 1/2 years of dating and 13 years of marriage!  The man is a saint! (Some days I can barely stand myself, but I don't have a choice in the matter and he does!)

Just in case you were wondering I thought I would share how it is that we came to be the most awesome couple that we are today. lol!! (the cliff notes version that is) 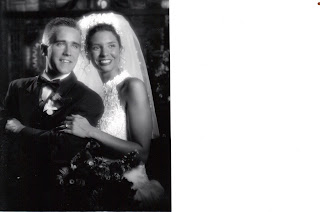 We attended the same church from the time we were little.  It wasn't until we were in junior high that we actually remember knowing each other.  My parents were youth group leaders and Ryan happened to be the one and only boy in our youth group of super cute girls!  Being the smooth guy he was he decided to bring his buddies with him to our events.  I suppose they all acted as his wing men!

Ryan will tell you that he didn't like me back then.  He thought I was too bossy.  Which is probably true! (and that much hasn't really changed - the me being bossy part) My parents were the leaders of the youth group for goodness sake.  I probably felt obligated to try to keep some of my friends in line!  At any rate we got along fine because we enjoyed introducing our friends to each other.  So he dated most of my girlfriends and I dated some of his guy friends.

My first kiss was actually his best friend!  This best friend was in our wedding and is now married to my sister!  How crazy is that?!  But I digress....

We became good friends while I dated his best friend and he dated my best friend. (if that wasn't the perfect situation for teenagers to be in)  He was my go to guy for advice, a date for a formal dance (as friends), and someone to hang out with.  We often hung out with other friends and always had a blast together!

I never saw it coming.  I should have, but even now I can be a little dense in these areas.  One night out of the blue he kissed me.  I was so shocked I had no idea what to say or do!  That was the beginning of the end for him!  Apparently he had made his choice and was going to stick with it!  By the time we actually got married he knew exactly what he was getting into because he stuck with me through the rest of high school and through college even though we went to rival schools!

Our life together has been one that has exceeded my expectations and although not everything has gone according to plan,  I can say that I wouldn't have missed a single moment of it! I am so blessed that he has been there with me through this entire adventure!  13 really is our lucky number! 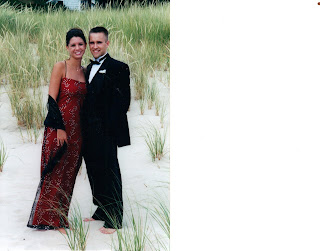