It Works! Wednesday - Hope and Help for Gout

June 15, 2011
While helping people lose inches I always encounter those with other serious concerns as well.  Fortunately, there is always a natural alternative!  For those suffering from Gout I have seen individuals go pain and attack free after taking Vital and Greens!  I have recieved testimonies about people being able to get off of their medications after being on the Greens and attacks going away quickly by taking Vital right away!  Adding cherry juice and flax seed oil to your diet will also help.  Below are some additional dietary considerations as well as information about Gout.

Some diet and lifestyle changes may help prevent gouty attacks:
Gout is a kind of arthritis that occurs when uric acid builds up in the joints.

Gout is caused by having higher-than-normal levels of uric acid in your body. Your body may make too much uric acid, or have a hard time getting rid of uric acid. If too much uric acid builds up in the fluid around the joints (synovial fluid), uric acid crystals form. These crystals cause the joint to swell up and become inflamed.
Not everyone with high uric acid levels in the blood has gout.
The exact cause is unknown. Gout may run in families. It is more common in males, postmenopausal women, and people who drink alcohol. 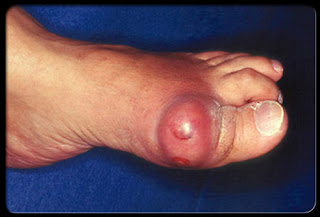