Fohawks and Piercings and Tattoos! Oh My!!!

June 07, 2011
It didn't take long...
The tough teenage stuff has started to trickle it's way into our house. 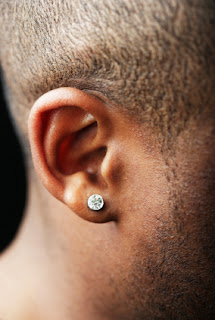 A came up the stairs on Saturday morning with a giant sparkly earring in his ear.  The child had actually pushed the thing through his ear!  He was beaming from ear to ear as he showed me.  You could almost hear a bubble pop when he saw the look on my face! (which was my "oh this is going to be sad for you" look)

Sorry, mister.  Not in this house.  Ryan and I knew it was coming eventually so we were prepared.  He told us he had pierced his own ear before and when I was shopping with him he stopped to admire diamonds and asked to buy one.

My response;
"First, you can't buy just one earring in a fancy jewelry store.  Second, you don't have enough money.  Third, your ear is not pierced and will not be for a long time.  And finally, if you are going to spend so much money on earrings they are going to be for me!"

I really don't think he was trying to be defiant by piercing his own ear.  He saw safety in numbers.  W came up the stairs not 5 minutes later with a giant sparkly earring in his ear as well!  If I were him I would have done the same thing!  Two of them against one of me!  And really it was only W's second day in our home!  How could I say no to a new child?  Sorry boys, but I know the tricks - after all,  the little ones try them out just about on a daily basis, just with different mediums so I have years and years and years of experience!  I almost feel sorry for the boys.  I am not worried they will not like me and I am not scared of them so they will have to find other ways to break me!

It is very difficult explaining to a 16 and 17 year old from different cultures who are not a native speakers of your language that this is not acceptable in your house.  I don't want the boys to be judged by piercings and tattoos and all of that.  They are going to have a hard enough time as it is living in a predominately white conservative area!

So no earrings for the boys.  They both had bloody ears for the day, but they will heal and hopefully they won't try that one again.  Now to await the next challenge - which I think will be the request of a cell phone!  (I don't think the boys really realize how much Spanish I can understand while they chat... I think I'd like to keep it that way...)
refugee foster care