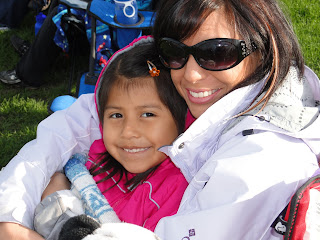 Yesterday was a typical holiday.  I set the kids' clothes out the night before and packed a bag with a change of clothes for each of them including myself.  I prepared some dishes of food to bring, had everyone sign the cards, put the gifts in gift bags, and set them up high and out of reach of small hands.  In the morning we rushed around and made it out of the door and to church on time actually remembering to take everything with us!  After church we went to my sister's house for brunch and then went to Ryan's parents' house for dinner.  By 7:30 we were home again with four exhausted crabby children.  The little ones were asleep within 15 minutes and the older boys had to sit down with me to do homework.  By 9pm Jackson was in bed and A was lifting weights in the basement.  I would have liked to sit down, but I had to prepare for Monday morning with notes, emails, and papers to be completed.  10:00 came and I ventured my way to bed.  I don't know how it takes me 20 minutes to get from the living room to my bed room every night, but that seems like the average amount of time to find my way toward slumber and somewhat solitude each night.

That was the day, but now to back track to the good stuff.  When I woke up at 6am to Tyce snuggling on top of my head and Lola fighting for the same space, I surprisingly didn't groan and roll over!  It was the perfect wake up!  Jackson came in the room next and gave me a poem from school with his silhouette.  It made me tear up.  Ryan made the kids breakfast while I got ready so I didn't have to prepare food the entire day!

When I came downstairs Lola presented me with a musical card from all of the kids.  She of course had to dance with me while it played!  Ryan had left me chocolate, a card, and a gift card to the mall!  These were actually his "back up" gifts.  It seems that each holiday no matter what he gets me or where he hides it I always find it!  I do not search for it at all!  I stumble on them every time!  So Saturday night as I searched for the lid to cover the fire pit I found the two chairs that I had wanted that Ryan had gotten for me!  He triumphantly told me that he had been with me long enough that he knew I would find them so he had "back ups"!  How awesome is he??!!! (If that had been my plan, I totally would admit to it, but really it is accidental and had just happens to work in my favor!)

That was how my day started.  Let me tell you about the middle of the day.  We left my sisters house and climbed into the car.  Tyce was tired and yelling about turning the movie in the car louder or quieter and kids were playing with the windows.  Out of no where Jackson began screaming in the back seat.

This was not a "I'm mad" scream or "be quiet" scream.  This was a panic scream!  Of course I yelled at Ry to pull over NOW!  Over three lanes he goes and onto a hill to stop the car.  We both jump out and A hands me the most ginormous bee ever!  He just hands it to me! (it was dead)  The bee had hit the window and landed on Jackson's lap.  It was dead, but he didn't know that and is apparently scared of bees to an extent where we had to take a minute to hold hands and calm down our breathing!

That was the excitement of the day thankfully!  The end of the day driving in the car with tired children was much like the middle of the day, but they eventually dozed off!

So there you have it!  A fun filled Mother's Day!  Definitely not a relaxing day, but I guess it is just part of being a Mom and I am very glad I signed up for it!
Mother's Day relax