The Honeymoon is Over

May 27, 2011
I have not forgotten what it feels like to be a teenager.
I remember how self conscious I was.  I remember how frustrated I was that my parents didn't understand me.  I remember how trapped I felt at times.  It was not the funnest time in my life.

As I now parent a teenager I have to keep reminding myself of these things.  Being a teenager is hard!  Now I have to add on the facts that he: 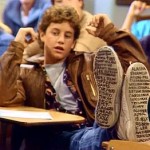 to get the entire picture of my teenager!

Looking at that picture is enough to scare anyone away, but I have to say that things are still going very well!  We did butt heads a bit over the weekend and had to have a little chat with the social worker because of the language barrier, but all was worked out and was nothing different then any other child would want to express.

Ryan has to remind me that we have dreamed about A being a part of our family before we met him and he knew nothing of us.  Where he is now in his life was not what he had planned on and he had no control over it.  Time will bring the gap together though.  In the meantime we will just keep doing what we are doing as it seems to be working well!  I think the honeymoon phase has ended and I am excited for that!! (remind me of that in a few months... lol!)
refugee foster care teenager