May 25, 2011
Ryan walked through the door after work with an odd look on his face.  It was a kind of half smirk half smile directed toward me.  He shook his head in a kind of disbelieving way and announced that he had some presents for me!

He pulled a large envelope out of his bag and handed to me.  It was addressed to him at his office and marked personal and confidential.  I dumped the contents out and found two notes from business associates of Ryan that I had met in Houston at his conference along with gifts.  Both of the notes and gifts were for me!  One associate was sending me an invitation for Ryan and I to visit and the Ghosts of the Bridgewater Triangle by Christopher Balzano which is a book about true stories of unusual occurrences in New England where he lives.  The other associate sent me a People Magazine that features Pippa!  I laughed so hard I nearly cried!  Obviously our unusual conversations that took place over the weekend in Houston had an impact on them!  If you need to catch up on those conversations you can read about it in Tagging Along... 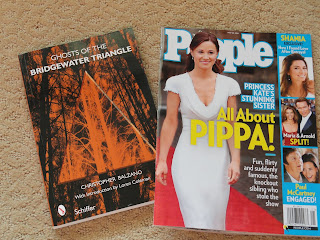 Ryan and his business associate that works in his office who came to the conference with us are a bit perturbed that they didn't get any fun presents sent to them, but maybe I am just that much more interesting... :) -  I know they have a very different theory.....
business confernece