May 24, 2011
Family Pictures
Capturing precious memories.  What could be easier and more precious then that?

When the kids were little I took them every three months to the mall to get their picture taken.  I jumped around, acted crazy, and bribed them with anything I could think of to get that perfect pose with that perfect expression!

As they got older I thought the process would be easier.  The verdict is still out on that one.   Being older they can understand where I want them to stand and that we are in fact taking pictures.  But, they can now talk back and give their loud opinion.  I can no longer put them in the clothes that I want them to wear without a struggle.  I can't pick up a teenager and place him in a spot.  The bribes have become bigger and the acting silly to get a smile just turns into a wrestle session for the three small kids as they get all riled up!

Saturday we took some family photos in our yard.  Our photographer, who happens to be my awesome neighbor and friend, was prepared for the craziness.  After all, she knows our kids and us and is used to our quirks by now! (or I hope she is...)  It wasn't just our family of six though.  We had my parents, my grandparents, my sisters, and my nieces.  A whooping 16 people!  There is no way to get babies, toddlers, elementary kids, teenagers, and grandparents over 80 to look at the camera let alone smile at the same time!  If a toddler was looking and smiling, a parent was grabbing for another child or a great grandparent was looking down at a baby.

Being that I organized everything, I was stressed beyond belief and ended up in bed with an extreme headache after the event.  One child lost television and computer privileges, two children were full from candy bribes and wouldn't eat lunch, and the last child had his nice shirt off and in the dirt before we got in the house!  We did get some very nice shots of everyone between the drama of wearing a "girl" shirt, Tyce shouting bananas every 5 seconds, crying babies, frowning toddlers, mud splatters on pants and shirts, and me bossing everyone around. (sorry about that family - but someone had to do it!)

The pictures where Photos by Kaity captured the true memories of the event will most likely not be posted on my wall.   Those memories don't feel so precious right now although I expect they will as the kids get bigger.... (or I hope they will!)    Now I know why we don't do family pictures very often! 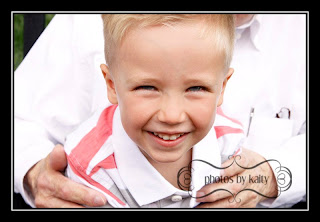 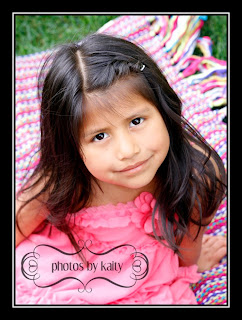 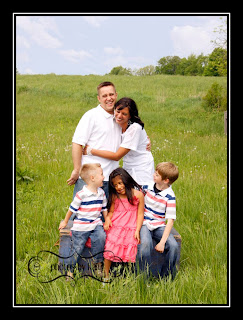