April 10, 2011
People - tourists - get a little crazy at the Disney Parks.  Most of the adults are worse then the kids!

On one particular day I was standing in line with my two little ones to see Tinker Bell.  We had been by the line twice before and weren't able to get in the line because they stop taking people after a certain amount.  Lola REALLY wanted to see Tink so we finally got there early enough to get in line and wait for our turn.  You see, Tinker Bell is really popular at the moment and is only at Epcot in one location so this was our only chance! 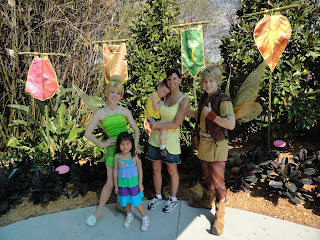 It was really hot out that day and we were standing in the direct sun.  Rather, I was standing in the direct sun.  Lola and Tyce were relaxing comfortably in their strollers with their shades overhead and their sippy cups filled with cold water.  The wait was long and hot.  When I got into line a mom, dad, grandma, and two little ones got in line behind us.  The little ones were cranky and hot so the dad and grandma took them around to see things and get drinks while the mom waited in line.  The mom and I chatted a bit and the dad came back with the kids every once in awhile.  When the line finally started to move the dad brought the little girl and stood in line with the mom.  After about 10 minutes the lady behind us asked if we were all together.  We said we weren't and she started to get a bit huffy.  She started saying things like she didn't want to take away the chance for their little girl to see Tinker Bell and on and on and on.  It took me a minute to understand what was going on.  She thought they had cut in line.  She was getting more and more irrate as her rant went on.  The dad kind of gave me a look so I politely interupted the irrate lady and told her they hadn't cut in line as the mom had gotten in line behind me and had stayed there the whole time.  No need to worry.  Deep breaths Mom.  You will see Tinker Bell.
On another day we went into Hollywood Studios.  If you know anything about that park you know that the most favorite attraction is Toy Story Mania.  We got to the park when it opened and rushed with the mob of people over to the ride to get a space in line and a fast pass before they were all gone.  We had a plan of attack.  Ryan got in line for the fast pass.  I held Jackson's hand and walked in front of the stroller to hopefully clear a path while Dad pushed it.  The mob was so intense that we were separated a bit and could no longer clear a path.  A woman was rushing and not looking where she was going and ran into the stroller getting her flip flop stuck under the wheel.  Not only did she start hurling obsenities at my Dad who was too shocked to say anything but she took her fist -swung around and smacked him hard on the back!

Ryan saw the entire thing as did my Mom or I may have thought she hit him accidently.  After the shock wore off we laughed and hoped her day went better then it stared because obviously at 9am she was ready to take someone out!  Good thing it was my Dad she tried to pick on and not a small kid!

We rode our ride and when we got out we were joking about my Dad being accousted by a woman in Disney and another woman came up to us and told us she had seen the entire incident as well!  She was flabergasted and wanted my Dad to know that he was right the woman ran right into him and did hit him on purpose!  Wow!  Calm down!  Take a breath!  It is just a ride and you will get a turn eventually!
Disney Epcot Fast Pass Hollywood Studios stroller Tinker Bell Toy Story Mania