April 17, 2011
Grandparents are fabulous.  Let's get that out of the way right now!
At times though, the very cool things they give the kids should just stay at their homes and never enter mine!
One such cool thing are these balls: 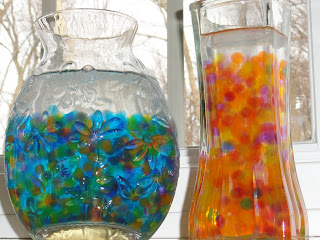 They look really pretty in vases with water don't they?  They are also cool to watch because as they suck up water the balls get bigger!  Unfortunately with little kids it isn't enough to just look at the balls.  We want to touch them!  As Tyce puts it - "They are ooglie"  So soon the balls go

﻿﻿﻿﻿﻿
﻿﻿﻿﻿﻿﻿﻿﻿﻿﻿﻿﻿﻿﻿﻿﻿﻿﻿﻿ ﻿﻿ ﻿
﻿
﻿﻿﻿﻿﻿﻿﻿
﻿﻿﻿﻿﻿﻿﻿
﻿﻿
They are basically what is inside a baby's diaper that sucks up liquid.  So if you mash a bunch of them up they get stuck all over EVERYTHING and are impossible to to remove!  It has been days and I am still finding what I refer to as the insides of diapers around the house!
Yes, I should have put them up and out of reach really fast, but my kids are faster and ultimately figure out how to scale walls to get what they shouldn't!
Next time, we'll just keep the pretty oogly balls at Grandma's to play with the next time we come!
baby diapers Grandma's house