April 21, 2011
I feel like I just had a baby.  Not in the pain after birth sort of way, but that complete euphoric feeling you get after you hold that precious little bundle in your arms!  I am walking on air and have been since we saw our son walk down the ramp at the airport!

Yesterday was a roller coaster kind of day!  We had a scheduled flight time and I had the day planned out to the minute so dinner could be in the crock pot, the house could be cleaned, and Jackson could be picked up from school.  If you have been through any sort of foster care, adoption, government, or anything to do basically with children in general you know that things have a tendency to not go as planned!  So of course they missed their flight!  The day was quickly rearranged and they came in on a later flight.  That just meant more pacing and agonizing over nothing and everything for me!

As we rode to the airport Jackson asked us if I knew what A looked like.  I told him that he probably had darker skin and hair but I hadn't seen any pictures of him.  Tyce piped up and asked if he was a girl.
"No, he is a boy."
"No, he can't be a boy!  Boys have blue eyes and girls have dark hair and eyes!"
So cute!  The girls in our family have dark hair and eyes and the boys are lighter so Tyce thought for sure A had to be a girl if he were dark too!  Amazing how those little minds work!

At the airport I had a complete feeling of deja-vu.  We waited with our sign and gifts, but we didn't know who we were looking for!  We knew that there would be two boys arriving with an escort, but we wouldn't know which boy was ours!  When we went to visit Lola for the first time in Guatemala we sat on the balcony for hours waiting for her arrival.  When she finally did arrive she was with another little girl.  We didn't know which baby was ours!  Of course we figured it out really quickly as we did at the airport yesterday!

Maybe it is a mom thing, but the moment I saw him I wanted to squeeze him like crazy!  He reached out to shake my hand and I went right in for the bear hug! :)  The kids were pretty shy at first, but as I type this today, the little ones are following him around like ducklings!  They jabber and jabber to him and he just smiles and nods without comprehending a word and they are in heaven!

Our drive home was rather quiet with A in the front seat taking it all in.  He had a really long day!  Once home we sat with our case worker and went over a lot of paperwork and questions!  So much to take in all at once!

By the time we were done it was well past dinner.  We all sat down to eat and were able to chat with each other in Spanish!  (it does come back!)  After the little ones were put to bed A watched our favorite shows with us.  I'm sure most of it is not understood, but it was still such a wonderful feeling to sit with our new son watching TV!  Such a simple little moment but so awesome!!! 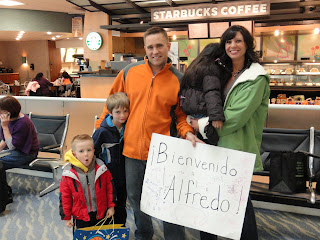 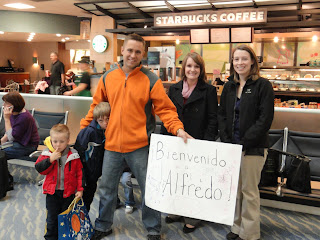 Waiting at the airport!!  I know you are probably waiting to see all of the pictures with him in them, but unfortunately I'm not allowed to post pictures of him on my blog or on facebook so you will just have to meet him in person!!
refugee foster care