Easiest Way to Lose a Child in a Crowd 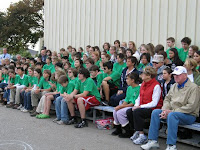 When I was looking up tips on traveling to Disney, one of the suggestions I came across was to have everyone in your group wear the same color so you could find them easily in the crowds.  While I thought this was a great idea, I didn't implement it basically because I was too lazy and frugal to go out and find something that everyone could wear that was the same color!  Many families in Disney did implement the idea, however.  Many had matching shirts with their names on them or a catchy phrase about their vacation.  I could definitely tell they were all together, but I don't know that it would have made it easier for me to find a lost child in a mob of people if he was wearing the same shirt as I was.

On March 17 we visited Epcot.  There were many many many families and groups that day that wore coordinating shirts and outfits of the same color.  The only problem was that the color everyone chose was GREEN for St Patty's Day!  It was a throbbing mass of green the entire day!  If you wanted to lose yourself or someone in a crowd this was the day to do it!
Disney Epcot St Patricks Day