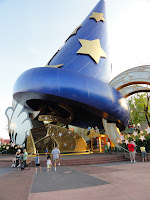 Monday was our last full day in Disney so we got up to be at Hollywood Studios when it opened.  Of course I had a plan of attack!
I was told by more than one person that Toy Story Mania was the most popular and funnest ride so I was supposed to get a Fast Pass and then wait in line for the ride itself right away.  The mad rush to the ride, which of course is toward the back of the park, was unreal!  People were trying to run without running.  You could just feel the frenzy in some people and that kind of thing is contagious!  It was not pleasant!
﻿
﻿

Ryan took all of our tickets and got us all Fast Passes for the ride while the rest of us got in line for the ride.  Unfortunately he didn't make it on to the first ride with us.  The ride is an arcade game with 3D glasses.  You have to shoot things and get points for it.  At the end you see your score so you can go on again to try to beat the score.  From the looks of some of those scores many people do just that.  The kids enjoyed the ride as did the adults, but I was a little baffled as to why it is as popular as it is!  I think Tyce and Lola liked it mainly because of the Toy Story characters and Jackson liked it because he wanted to try to beat everyone's scores, but we didn't HAVE to go on it a second time.  We did use our Fast Passes to go again with Ryan and by mid-morning all of the Fast Passes were gone and the line for the ride was 70 minutes long!
After our first ride we ventured The Studio Backlot Tour.  This is a two part adventure where you watch a presentation and then ride a tram.  You see things from movie sets and they show you how some special effects work.  It was a 30 minute ride.  Personally, I thought it was ok.  I would save it for the afternoon when you want to sit and be entertained.

We then headed to the Muppet Vision 3D.  You go in a theatre and watch a show with 3D glasses.  It was cute, but we all agreed out of the 3D shows we had seen we liked Mickeys Philharmagic the best.
﻿
﻿

Right as we got out of the theatre we saw Lightning McQueen and Mater from Cars so we had our pictures taken with them and headed over to lunch at Mama Melrose's.  I was expecting more of a pizza joint, but the food was more Italian.  It was good and the portions were large!  This wasn't a character dining experience although they do offer that at Hollywood and Vine for breakfast or lunch.  I wanted the Fantasmic package so we could get VIP seating for the Fantasmic night show and I couldn't have both a character dining experience and the VIP seating.
The Fantasmic show is an outdoor presentation that includes, fountains, fireworks, characters, music, a story line, and even some fancy projection work!  When you reserve a meal to include the Fantasmic package at one of three restaurants in Hollywood Studios that offer this package you get VIP seating for the event.  I chose to take the kids to this show over the other fireworks simply because they were scheduled to happen the soonest in the evening!  I am getting a little ahead of myself with my day, but since we are on the topic of Fantasmic I will tell you about it!

The VIP seating was the better seating as the actions of the show tend to be centered right in front of that section.  You sit on closed bleachers (you know the kind you can't fall through) and there are concessions nearby as well as vendors going through the stands.  I don't want to say too much about the actual show so you can enjoy it for yourself!  It was rather amazing and entertaining, but it was way too scary for our little ones.  The villains in the show are literally larger then life and Lola had her face buried in my shoulder for half of the show!  I had to tell her when it was safe to look again.  The fireworks and other noises didn't bother the kids, but the villains were super scary so keep that into consideration if you decide to go to Fantasmic.
After our lunch we hit Indiana Jones Epic Stunt Spectacular which Jackson really enjoyed.  He especially appreciated the show after we arrived home and I let him watch one of the movies.  He was excited to tell me that some of the stunts he saw were in the movie and that the sounds were the same!  We also went to Lights, Motors, Action! Extreme Stunt Show.  For both of these shows we sat on bleachers in the shade.  The Motor show was full of cars and motorcycles doing stunts and crashing.  There was a lot of fire and explosions.  I appreciated seeing how the stunts in movies are actually done.  It was very interesting and entertaining although at that point I had a very wiggly 3 year old on my lap who was super distracting!  We had wanted to hit the Star Tours - Star Wars ride, but it was closed down.  Instead we watched a little of the training of young Jedi's.  Kids can go in line and get a laser and train to be a Jedi and battle Darth Vader.
At one point I had gotten in line to see Woody and Buzz because Tyce was begging to see Woody.  The are housed inside a building across from Toy Story Mania.  While I stood in line with the two little ones, Ryan and Jackson took all of the tickets and got Fast Passes to The Twilight Zone Tower of Terror and the Rock'n Roller Coaster Starring Aerosmith.  This worked out very well as later on while I took the little ones to Playhouse Disney Ryan and my parents went with Jackson on the bigger rides. 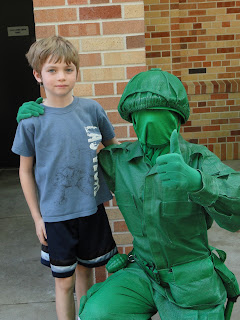 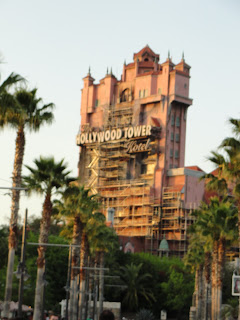 Jackson's favorite thing about this day was the Rock'n Roller coaster.  Ryan and my parents also enjoyed it.  They said it went really really really fast and at first Ryan was a bit nervous about what he had gotten himself into!  The Tower of Terror is a ride in which you are in an elevator and it drops unexpectedly.  They enjoyed this ride as well, but not as much as the roller coaster.
Disney Junior Live on Stage was a big hit for the other two kids!  You go inside and sit on carpet.  There are puppets on stage that carry out a story.  The characters that were featured were from Mickey Mouse Clubhouse, Little Einsteins, and Jake and the Neverland Pirates.  Bubbles and streamers come out of the ceiling and the kids LOVED it!
After venturing around and looking for Cast Members to trade pins we headed over to Fantasmic.  There can be some splashing involved especially if the wind is blowing so be sure to sit back at least 15 rows unless you want to chance getting wet!
Our longest day was at Hollywood Studios, but if you go to the shows and rides you have to plan for a long day simply because most of the shows are at least 30 minutes in length!  When you get to the park be sure to grab a time schedule and plot things out right away or you will miss out on some great events.  Many of the shows do not play continuously.  Indiana Jones, Lights, Motor, Action, Playhouse Disney, and Beauty and the Beast are a few of the ones that have certain times so watch for this so you don't miss the performances! Oh and one event I could do without was the Journey into Narnia - Prince Caspian.  It was a preview of the movie and then costumes afterwards.  You are ushered into a small circular room and stand there watching the movie.  I actually sat right on the carpet.  Definately didn't need to see that one....