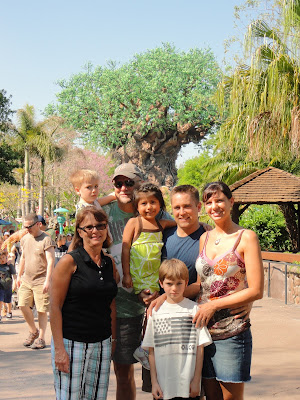 I guess after seeing the Cirque du Soleil show the night before I felt inspired to be a knife swallower for the next few days.  The only thing was that I never had any knives, I just felt like I was swallowing them!  Needless to say our day at the Animal Kingdom was a bit rough for me, but Mommys don't get sick so I pushed on!
We started the day off very early.  We had reservations at 8am at the Tusker House inside of the Animal Kingdom.  The park doesn't open until 9am, but if you have reservations you give your name at the gate and venture inside.  For the first time there were no crowds!  We could see the Tree of Life and walk the trails without seeing any other people!  How rare of a treat that was!
﻿
﻿ I picked the Tusker House because they have a character breakfast.  Donald was standing outside.  We had seen him the day before so we skipped that small line and went right to our table.  The meal was a buffet like Crystal Palace and the food again did not disappoint.  There were waffles shaped like Mickey, lots of toppings, eggs, meats, biscuits, fruit, cereal, yogurt, and sweet treats to name a few of the choices!  Everyone found something they could eat, even the Mom swallowing the knives found something smooth to go down!

Again each character with the exception of Donald came to our table for pictures and autographs.  Mickey, Daisy Duck, and Goofy were all there dressed in their safari gear.  The kids also had a chance to take some drums and make some music with the characters during our breakfast.

Immediately after breakfast we headed to the most popular ride which is the Kilimanjaro Safari.  We were already in the back of the park being at the Tusker House and we were early so we were in prime position!  There were a ton of animals out and roaming around in the morning sun which is the best time to see them.  The kids loved seeing them all and were in awe since there weren't any cages and we were just in a jeep going on a road.  The ride can be bumpy sometimes, but nothing we couldn't handle!
Conveniently located next to the exit of the Safari is the Pangani forest exploration trail.  Jackson enjoyed finding the birds flying overhead and my favorite was the gorilla exhibit.  It was fun to watch the baby roll around and act like a human toddler!
Our next stop was It's Tough to be a Bug.  This is a 3D movie experience.  I say experience because you will get sprayed with a little water, smell a stink bug, and feel like there are bugs crawling on your chair.  I warned the kids before we went in so they would be prepared.  If you don't want to have spiders flying at your face just take your glasses off and if you don't want to feel the bugs on your chair - which even made me jump and squeal - slide yourself to the end of your chair toward the end of the show.  Lola wasn't a big fan of the show, but I thought it was a riot!  I also like that the line winds under the Tree of Life so there is a lot to look at as you walk. 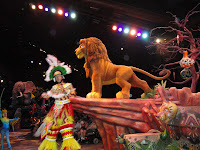 The Festival of the Lion King is a must see so that was our next stop.  We parked the stroller and went right inside.  I would recommend sitting on an end if you can because the performers will come out of the sides and will interact with the children in the aisles. We all enjoyed the singing, costumes, and performances.  It is more then dancing and singing as there is some acrobatics that the monkeys perform! 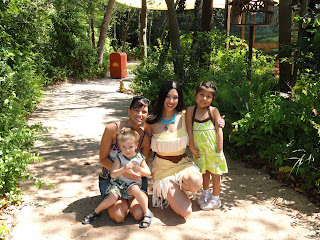 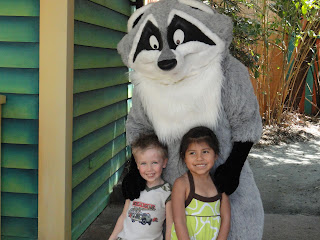 Since the Festival of the Lion King is located in Camp Mickey.  You can see various characters in this area if you would like to.  We saw characters from Pocahontas, Bambi, and Tarzan as well as Mickey, Daisy, and Goofy.  We picked a shaded spot and ate sandwiches we had brought with us that day.  I was glad we had packed a lunch.  A hot dog was almost $5!!

﻿
﻿ After our lunch we heading into Dinoland USA.  Ryan, Jackson, and I went on Dinosaur while my parents and the little ones found some shade, napped, and had ice cream.  I was very glad that we did not bring Lola on the Dinosaur ride!  It is SCARY, DARK, and LOUD!!  Larger then life dinosaurs come out of the dark at you and roar!  You can't see where you are going or what is coming around the corner.  I admit that I screamed and gripped the bar in front of me on more then one occasion!  I also held on to Jackson.  I actually did it more for my comfort then his!  The picture they took of us was hilarious!  The three of us all looked terrified!

Jackson really wanted to go on Expedition Everest.   So Ryan, Jackson, and my parents went on that ride while I brought the little ones to see Flights of Wonder.   Jackson LOVED that ride!  I think it was his favorite of all the rides in any of the parks!  The little ones and I enjoyed our show.  We were in the shade and sitting down which appealed to my achy body!
The timing was perfect and we all met up again at 3:30 just as our show was completed.  Despite my discomfort, I wanted to stay for the parade, but everyone else was ready to head out.  There are quite a few things we missed that I would have liked to do like Nemo's Musical, Rafiki's Planet Watch, and the Maharajah Jungle Trek.  While the parade was in full swing would have been a good time to do this as the streets were packed with people therefore, making rides and attractions less congested.
We all enjoyed our time at the Animal Kingdom and the day just flew by!
For notes on all of the rides go here.
Animal Kingdom Character Dining Disney Tusker House Walt Disney World