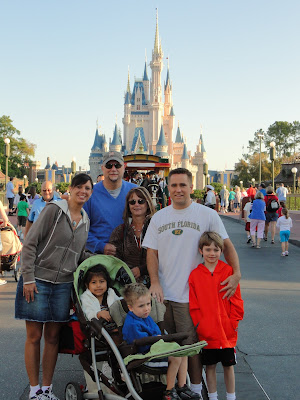 We thoroughly enjoyed our entire vacation, but this day was my favorite day!

We arrived at the Magic Kingdom before it opened and I briefed everyone on where they were going.  Yes, I was the drill Sergent and amazingly everyone obeyed!  I was taking the little ones straight back past the castle to the Dumbo ride while Mom, Dad, and Ryan took Jackson on Space Mountain.  The Dumbo ride fills up really quickly so it is a good thing we went on it first!  The little ones loved the ride and the bigger ones loved their ride!  If you want to take advantage of a photo opp there is a stationary Dumbo next to the ride where you can all load up to take pictures.


Pinocchio was near by so we took a minute to buzz over to greet him and were on our way to Peter Pan's Flight.  Jackson wasn't too thrilled with this one, but the little ones loved seeing all of the characters as we flew through the air!  Next it was on to the Haunted Mansion.  We walked right in.  It really wasn't scary at all so it was fine for my 4 year old and 3 year old.  It was a good thing we went there when we did because later I looked over and the line was unbelievable!
﻿
﻿

We decided to split up again and my Mom and I took the little ones to the Winnie the Pooh ride while the big boys went to Big Thunder Mountain Railroad.  Jackson loved this one and the Winnie the Pooh ride was cute with a very short wait.  Be sure to stop in front of the Prince Charming Regal Carousel and try to pull the sword out of the stone!  Some children are actually able to do it!  Unfortunately none of our family had what it took to raise the sword! I forgot to take a turn! 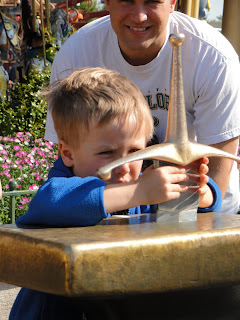 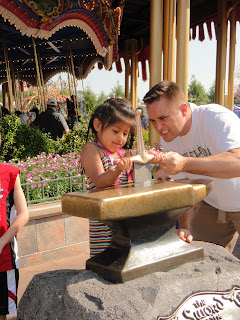 Our final stop in Fantasyland was Mickey's Philharmonic.  You get 3D glasses and sit in a nice theatre.  There is a storyline, music, and a little water during the show.  We all LOVED this show!  It was super fun! 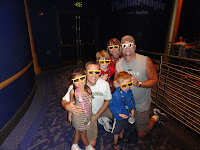 In Tomorrowland we had to visit Monsters Inc Laugh Floor.  Jackson wanted me to let all of you know that it was really funny and he liked "That guy".  If you have seen the show or go to see it you will know what he is talking about!
Walt Disney World Railroad was another stop we made.  We rode the train around the park for a little breather.  We saw where Woody was in Frontierland so we ventured over that way.  We didn't end up seeing him, but Jackson and Ryan went on Splash Mountain while my parents, the little ones, and I went to Country Bear Jamboree and Liberty Square Riverboat.  Both of those were ok to pass the time, but not our favorites. 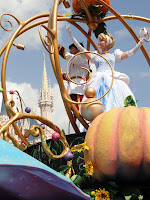 When we met up again my parents secured a spot on the street so we could all watch the parade at 3pm.  We had a great spot in Liberty Square across from the castle in front of a Christmas store.  It was hot so the air conditioning from the store was wonderful.  This was our first Disney Parade and the kids loved it (so did I).  The excitement and energy were contagious!  Just about every character was in the parade.  There were bands, songs, and dances.  Those performers must sweat off 10 pounds of water each day!!
After the parade we scooted behind the castle to Cinderella's Royal Table.  I will admit that I was actually giddy at this point!  I took out Lola's "princess" dress and white gloves and got her dressed.  She was so excited and twirled around for all of us!  We were ushered into the castle to see Cinderella.  Lola had her picture with the princess and then the entire family had a picture taken.  Next it was up the winding steps of the tower to the dining room.  The room was how you would expect a castle dining area to look.  It was very regal.  I was disappointed that the windows were covered, but they are doing renovations in Toontown so they don't want you looking over construction.  That didn't take away from the experience however.
This meal was pricey and you are required to pay for it when you make your reservation, but it is soooo worth it!!  The food was exquisite!  I had prime rib.  Again the staff was phenomenal!  We were called "my lady" "princess" "prince" "queen" "king" and "my lord".  The kids were treated like royalty and received the most attention.  We were greeted by four princesses.  They do an entire presentation before each princess appears.  The anticipation was fun for everyone.  We were personally visited by Snow White, Belle - Beauty and the Beast, Aurora - Sleeping Beauty, and Ariel - The Little Mermaid.
The princesses even talked like their character in the movie!  Ariel called the kids star fish and Belle talked with Jackson about reading books and what his favorite book was!  I continue to be very impressed with Disney's efforts to make experiences like these ones that you won't forget and will want to have over and over again!!
We were also given wands and swords that we waved around with the characters for a presentation and a wishing star to make a wish on.  The swords were a huge hit for the boys and were hidden on the bottom of the stroller rather quickly! (jsut look at the pictures of Tyce below to see why!)
Our reservation had been at 3:50 so after discussing if there was anything else we wanted to experience we headed toward the front gate to look at merchandise.  At the Magic Kingdom they have a street party in front of the castle at different times throughout the day and we walked right into it!  They have floats with characters and dancers on the street.  For a portion of it they rope off the street for spectators to watch then they invite everyone to dance along with them!  This was so super fun!  Lola and Tyce were able to dance with Woody and Jessie!  They loved it as did their Mommy! (I love to dance)
After the street party we ducked in a few shops and stopped before going out of the park.  It is here at a building off to the side that you can get free pins.  We got a pin for our first visit, but you can get pins for birthdays, anniversaries, and just about any other occasion that would bring you to Disney.  If you wear the pins you sometimes get special recognition from characters and other cast members.  It was also in that area that there were cast members milling around with hula hoops and other fun toys for the kids to play with.  The kids all got into goofing around for a while.  We also traded a ton of pins with cast members here!  The kids loved to trade pins!  Jackson had specific pins he wanted, Tyce didn't care too much, but liked the attention, and Lola just liked to trade every and any pin!
There is just so much to experience in Disney besides the rides even though all of the rides are unique and have a story along with them!  I think we could have come back another entire day and experienced even more new things!  Remember to slow down a little and take it all in, because you may miss the most fun thing of the day if you hurry past!
Here are more pictures from our day! 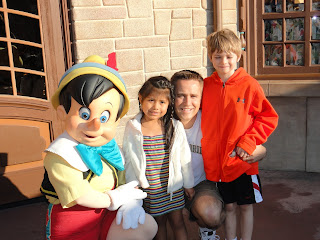