First Day at the Magic Kingdom 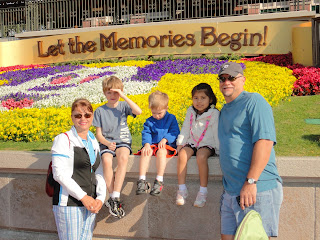 Our first day at Disney was spent at the Magic Kingdom.
If we do this again I would put a buffer day between our travel day and when we start going to the parks.  The kids were so excited to be in the hotel room and on vacation that it took them FOREVER to fall asleep.  I had planned for all of us to be at the Magic Kingdom when it opened, but I didn't want to wake any of the kids to get them going in the morning!  So we ended up arriving about 1 1/2 hours after it had opened.  Not the best plan - and not my original plan!
Another thing I should have done is re-check the open times for the parks right before we left!  The times changed and the Magic Kingdom opened up an hour sooner then the last time I had checked!  So we were even later then I thought!  This resulted in the crowds surging a lot sooner then I expected.  Everyone tells you to go early and they are right!!
I also didn't know that when you park at the Magic Kingdom you can take a tram, but it doesn't take you to the entrance.  You have to take the monorail or a boat to get to the entrance of the park.  Factor all of this in when you visit the Magic Kingdom.
Also be prepared to give your kids some time to get adjusted when they first experience the park.  There will be hundreds of people in a relatively small area in a new place and that can be very overwhelming!  We wanted to take some pictures of the castle and the kids right away, but things were just too stimulating for them.  They needed time to take it all in and know that the crowds would not swallow them up!


We had a great day even if we didn't go on a lot of rides.  We started out in Tomorrowland.  We grabbed a Fast Pass for Buzz Lightyear's Space Ranger Spin first.  Then we went on the People Mover.  The People Mover isn't full of thrills, but it is a great first ride!  There are times of dark and flashing lights so it got my kids ready for more stimulating events!  While on the People Mover we saw Buzz Lightyear and hopped in line to see him.  Tyce was so excited!!  That child's grin was a mile long!  By the time we were done with autographs and pictures it was time to park our stroller and get in the Fast Pass return line.  It took us a very short time to get to the front of line and on  the ride.  The kids loved the Space Ranger Spin and Tyce wanted to go on it again!
Be aware that Cast Members (Disney Employees) will move your stroller to a better area.  You may have to search for it!  A balloon on the handle helps you spot it quickly.

For lunch I had made reservations at the Crystal Palace.  It was great to sit down in air conditioning to eat!  It was a buffet and the food was superb!  They had food geared more for adults and food geared more for children.  We made quite a few trips to the buffet line!  Another great thing about this dining experience and the reason I made reservations here is that Winnie the Pooh, Eeyore, Piglet, and Tigger all were there!  They take time to visit everyone's tables, take pictures, sign autographs, and clown around!  The kids LOVED it and so did the adults to be honest!!  We avoided long lines and got more time with the characters!  They even had a parade with the characters the kids could participate in!  This was a highlight of our day!

Our final ride was the Pirates of the Caribbean.  Jackson liked the pirates and my mom really liked trying to spot Johnny Depp!  No one got scared and everyone was happy to sit and enjoy the show!

So we arrived at 9:30 and left around 3:15.  The day went by quickly!  Back at the hotel we enjoyed time in the pool and dinner in our room! (we went grocery shopping the day we arrived because we had a kitchen in our room)
﻿﻿
﻿﻿
﻿
﻿
Adventureland Buzz Lightyear Character Dining Crystal Palace Disney Fast Pass Magic Carpets of Aladdin Magic Kingdom People Mover Pirates of the Caribbean Tomorrowland