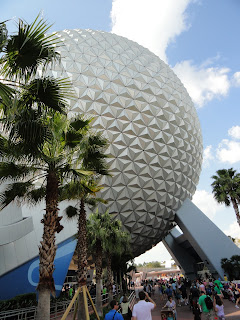 Our second day at Disney was spent at Epcot.
I didn't think we would be there much past 1:00 as I thought Epcot was mostly for adults.  I was wrong.  We arrived before they opened and milled around in the crowd waiting for the people to let us through.  Like every other person in the crowd we headed toward the ride Soarin'.  I ended up giving my parents all of the tickets so they could get a Fast Pass to the ride.  I couldn't even get the stroller through the crowd! 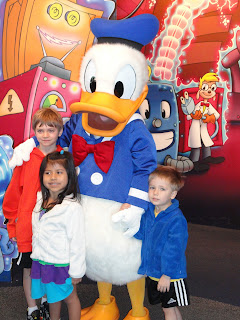 In retrospect we should have all just gotten in line for the ride right then and gone.  When we went back later in the afternoon the Fast Pass tickets were sold out and the Fast Pass line took an hour to get through!  The regular line was two hours long!  I was going to do the rider swap that you can do at Disney because Tyce was too small to ride, but on this particular ride I had to wait for my group to go through the line and then get in line again!  I didn't want to make people wait another hour while I rode Soarin' so we moved on.
As it was, while my parents got the Fast Passes to Soarin' I took the kids to see Mickey, Minnie, Goofy, Donald, and Pluto.  That worked out perfectly because there was no line so early in the day!  Tyce had a chance to clown around with the characters.  He got so bold as to start grabbing ears and squeezing noses!


There were certain popular rides that I wanted Jackson to experience so I sent him with my parents while I took Lola and Tyce around.  Jackson and my parents went on Test Track and Mission Space.  They thought both of the rides were fun.  At the end of the day I think Soarin' was the favorite ride for all of them I should mention that Lola went on Soarin' as well and loved it!
While they went on the rides, Lola, Tyce and I waited in line to see some of the Fairies.  Tyce as just as excited as Lola was to see them.  Right now Epcot is the only place to see Tinker Bell and her friends.  Later they will be moving to a more permanent location at Magic Kingdom.  Lola gave the fairies hugs and Tyce hid behind me.  He peeked at them and giggled like crazy!  He knows a pretty girl when he sees one!

After seeing the fairies we walked into the Pixie Hollow.  They had each of the fairies made out of plants and flowers.  There was a shaded playground for the kids with shredded rubber to run and jump on!  They even had activities for the kids to do and when they were done they got an entire roll of fairy stickers!  They were ecstatic!


When we all got back together again we went into the butterfly house where the main attraction for my children was a lizard they spotted on a plant.  For lunch we had reservations at Coral Reef.  The ambiance was awesome!  We sat right across from a giant aquarium and were visited by giant sea turtles, rays, and even sharks during our meal!  The food was very good, but there are not many choices for adults or children.  The kids' menu had pizza, grilled fish, grilled chicken and something else on it.  My kids all ate the pizza which was served on a Mickey Mouse shaped plate.  I thought for sure that Jackson would order fish, but he said he couldn't at that restaurant because he didn't want to make the fish in the aquarium feel bad! 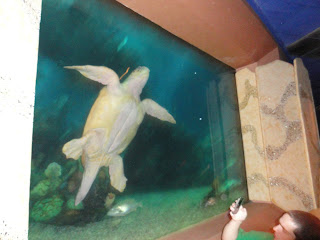 After a leisurely lunch we went next door to the The Seas with Nemo and Friends pavilion.  We rode the The Seas with Nemo and Friends which didn't have a long wait and went around to see the creatures in the aquariums.  The kids enjoyed this as well.  We were disappointed that the manatees were napping while we were there, but we didn't want to wait around for them to wake up.  The highlight of this area was Turtle talk with Crush.  You go into a room and the kids can sit on the floor while the adults sit in chairs behind them.  If your kids won't sit by themselves on the floor just pick a spot toward the back corner to sit with them on the floor.  They won't be able to see if they sit in the chairs.  Crush interacts with the audience and the kids are in awe!  Adults will even enjoy the short show!

By this time it was already around 2:00!  We headed over to Soarin' to use the Fast Pass.  After Soarin' we split up again.  Jackson wanted to see the World Showcase and Lola and Tyce HAD to see Tinker Bell!  We met up again in the World Showcase for a quick ice cream (for the kids who were still awake) and then we headed home!

﻿
﻿ I know I perceived World Showcase of being more for adults.  However, the countries all have characters at them and different types of street entertainment.  Some countries also have films or rides!  Of course there are ethnic foods at each country and shops.  Lots to see and do for all ages.

We could have spent the entire day there!  There were other labs, pavilions, and things I had wanted the kids to see, but we ran out of time!  I felt good about the day though.  We were able to see more in a shorter time then we had the day before!


We had to leave at a certain time because Ry and I had business obligations.  (Doesn't that sound so official!) We did have a great day at Epcot and each of the kids went home super happy!
That night Ryan and I were shuttled with his business associates to Downtown Disney.  We ate at House of Blues.  The food and service were superb.  At times I like these kinds of dinners because I get to dress up and eat a really nice expensive meal.  At other times I am not all that excited about them because the conversation is mostly about the business of which I know nothing about.  When I find myself super bored that is when I start watching everyone at the table and notice how many scotches one man puts back and how many times the waitress flips her hair for the gentleman across from me.  I sometimes become really good friends with the waitstaff and chat with them on my way back from the bathroom.
After dinner we headed across the street to Cirque du Soleil - La Nouba.  I was amazed by the talents of the performers.  Their abilities were unmeasurable.  Personally, I could have done without the story line and just stuck with the performances themselves.  I found the story line to be odd and sometimes disturbing.  All in all it was entertaining, but I wouldn't choose to go again.
﻿
﻿﻿