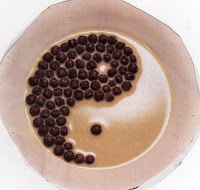 When I was little I remember my neighbor telling us that one Easter he went outside and gathered treasure in a basket.  He filled his little basket with as many chocolaty Coca Puffs as he could find and brought them inside to present to his mother.  I'm sure his mother thought it was wonderful to have a basket full of these treasures in the house picked up especially for her by her son!
You all know they weren't really Coco Puffs but rabbit poop right?  At Easter time in the past my husband has scattered Coco Puffs inside the house saying that that silly rabbit left them behind.  We all giggle and scream when he eats a handful of them!

Today, for the second day in a row, my three year old son has actually picked up Coco Puffs outside!  He has been told that it is rabbit poop and you can't touch it.  He doesn't even know what Coco Puffs are so there was no confusion over that!  He just wanted to touch the rabbit poop!  Of course it doesn't help that his brother laughed hysterically that he touched the rabbit poop and then encouraged him to touch the dog poop in the neighbor's yard as well!  Today without his brother's influence he continued to be curious about the poop and proceeded to touch it again!

I guess I should be thankful he hasn't brought it into the house, filled his pockets with it, or tried to taste it!
coco puffs Easter rabbit poop silly story three year old